Built in 1937 as a combination of residential and commercial premises for wealthy gold miner and financier Claude de Bernales, Perth’s London Court is designed using the architectural features present in Elizabethan times.

London Court attracts local and international visitors with its friendly, inviting atmosphere and unique architectural style making it superbly different to the sky scrapers it is nestled under in the City of Perth.

The only walk in the world outside Britain that has captured a setting and atmosphere so similar to that of Tudor England, London Court is a retail arcade running between Hay Street Mall and St Georges Terrace in the heart of the Perth Central Business District (CBD).

At the decorative Hay Street Mall entrance, a blue-faced clock chimes every quarter of an hour. The clock face is a replica of the “Great Clock” at Rouen in France. Above the clock four knights, known as the “Tournament of Armoured Knights”, circle in the window when the clock chimes.

A second clock is located at the St Georges Terrace entrance. This clock is a replica of the iconic “Big Ben” which stands tall above the Houses of Parliament in London. In a window above this clock is a miniature St George doing battle with the dragon. 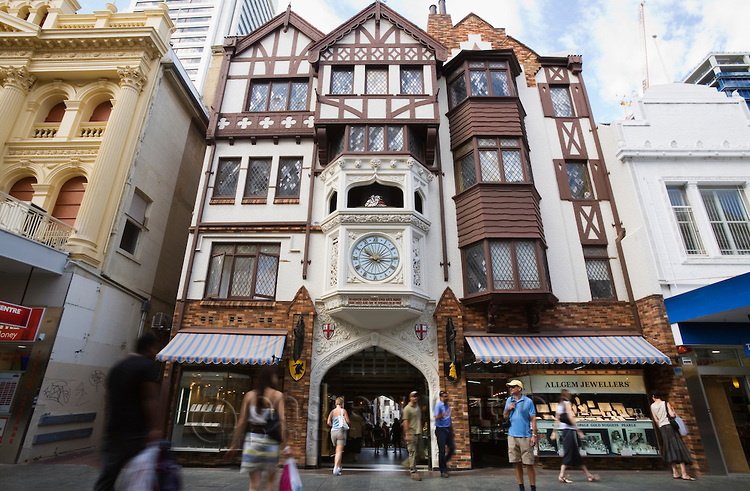 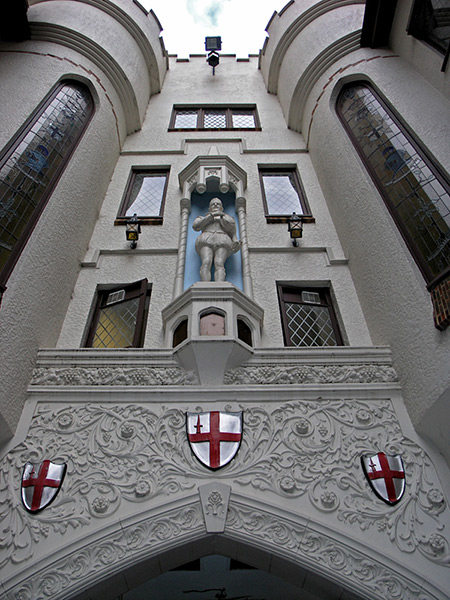 Copper coloured ships decorate the classically moulded ceilings at both entrances to the Court whilst containers moulded with lions and unicorns line the walkway providing an aesthetically appealing version of modern refuse bins!

Walking into the arcade looking towards the Hay Street Mall, visitors can observe the name of the Court’s plasterer engraved into the plasterwork on the left hand side of the tower. Also in the arcade, statues of Sir Walter Raleigh and Dick Whittington stand above the first level facing each other at either end of the Court. Mr. Whittington’s facial expression shows he is overwhelmed at finding himself in Tudor times!

A single dovecote hangs hidden on the side of one of the buildings half way along the picturesque arcade and six weather vanes are located on top of the buildings. Several stairways within the arcade take visitors to the second and third floors to admire London Court through some of the arched iron openings. From these landings visitors get a special feeling for the narrow streets, facades, window boxes, ornaments, decoration and village-like atmosphere of life in a past era.

Although the designers intended to create a structure that would be reminiscent of British taste, as you take a walk through London Court you feel a sense of France and Southern Spain too. Best of all, this open roofed Court is bathed in the glorious Western Australian sun under a vivid blue sky.

Protected from the hustle and bustle of Perth’s busy St Georges Terrace and contrasting with the modern day mall-ways weaving through other parts of the City, London Court is one of the world’s architectural treasures.

It is a very special place for anyone who has ever visited Perth and wandered their way past the small shop windows, peered from the balconies or been enchanted by the musical drama unfolding upon the hour. 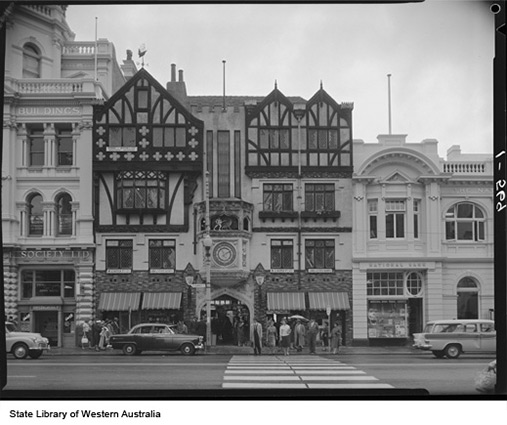 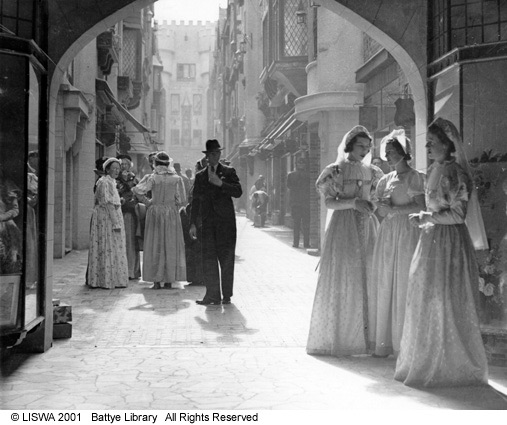